Worldwide, there are an estimated 121 million school-age primary and lower secondary children out of school, of which an estimated 36 percent live in conflict-affected countries. Although there are a myriad of reasons why these 121 million children are out of school, one of the most significant is that there are no schools or places within schools to accommodate them. The opportunities for children and youth to attend school are often hampered by the limited public resources to build new schools or pay teachers. These limited resources are further strained in contexts coping with additional refugee and internally displaced children. In many countries affected by crisis and conflict, the government education system is broken or not fully functional. This provides fertile ground for the proliferation of non-state schools to meet the demand for education and provide opportunities to meet the shortfall in public supply. In places such as Democratic Republic of Congo and Haiti, upwards of 90 percent of primary and secondary enrollment is in non-state schools. While these schools, often supported by the community, can provide a safe learning environment and assist children and society to return to normalcy, the instability of the context can make it difficult for them to provide high-quality education.

USAID’s education strategy focuses on increased education equity and positive educational outcomes for crisis and conflict-affected children and youth. Toward that end, USAID decided to build on a six-country study from 2011 by performing a deeper analysis of the role of affordable non-state schools (ANSS) in contexts of conflict and crisis. USAID contracted with Education Development Center and Results for Development to conduct this study.

Affordable non-state schools are defined in this research as formal and non-formal educational institutions that are owned or operated by non-state entities such as private citizens, faith-based organizations, or NGOs, and that target lower-income or marginalized populations. The subject of non-state education is contentious, and more so when considered in crisis and conflict contexts.

This report addresses how to best leverage and capitalize on the ANSS sector as the government builds its education system in post-conflict contexts. It discusses the role of the affordable non-state education sector in a post-conflict context and the trade-offs of working with this sector as compared to the public sector in conflict-affected environments. The study provides a literature review from which a conceptual framework was developed to describe the key factors of conflict and ANSS and their interaction to produce educational outcomes. Two country case studies—one in El Salvador and the other in Kaduna State, Nigeria—were conducted to validate the conceptual framework. These components were then used to formulate recommendations for donor and government engagement with ANSS. 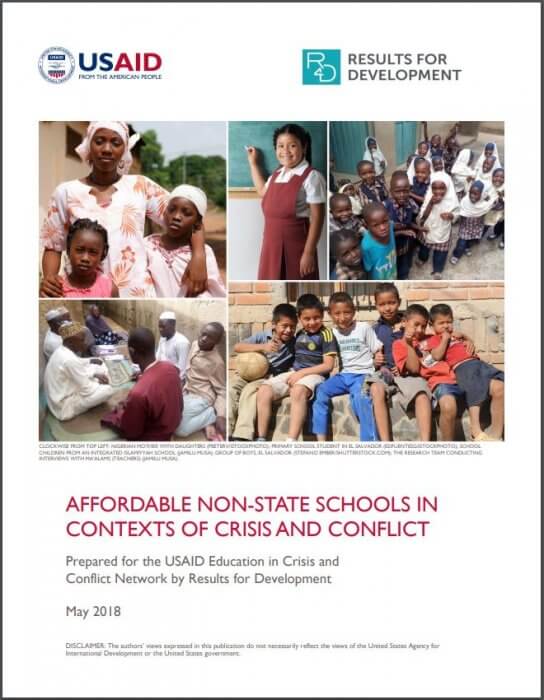